“A word-of-mouth sensation.” – NME
“The do-it-yourself stadium act.” – BBC
“The Glaswegian has built up a raucous following for his unvarnished acoustic anthems.” – The Guardian
“Gerry Cinnamon is our next folk hero.” – Big Issue
“His fans have the sort of feverish loyalty which can be found in very few other audiences.” – The Scotsman
“A top man doing supernatural things.” – Liam Gallagher
“His is the purest form of artistry – by sticking to the tunes, he lives or dies by the quality of his music.” – i

Gerry Cinnamon tees up a huge summer by sharing his brand new single ‘Where We’re Going’. The track emerges ahead of the release of his eagerly anticipated second album ‘The Bonny’ in April.

A remarkable live performer able to inspire electrifying, arena-wide singalongs from his devoted fanbase, Gerry will then spend the summer playing the biggest shows of his career to date. His headline shows are sold-out in advance – all 50,000 tickets for his homecoming show at Glasgow’s Hampden Park Stadium were snapped up within a day – and he’s also set to headline the Belsonic and This Is Tomorrow festivals. He’ll bring his summer festival schedule to a close at the Reading and Leeds Festivals, where he takes the penultimate slot to Liam Gallagher.

‘Where We’re Going’ adds a rush of Madchester-style melody to Gerry’s distinct brand of anthemic confessional folk. As a lyricist, Gerry has real flair for being able to express universal emotions in a manner that’s raw, real and relatable. He bravely explores his vulnerabilities, notably “I don’t know what to do with all the happiness that you’ve given me” and “I can turn my hand to anything but it seems that in the end I fuck up everything.”  Yet the overriding message is one of optimism and maintaining the belief that better times are on the horizon: “Where we’re going, this shit don’t matter.”

“‘Where We’re Going’ I wrote years ago at a dark time in my life,” says Gerry. “Folk can attach their own meaning to it but really it’s about being in a shit place with no way out, mixed with a gentle reminder to hold onto whatever wee dream you have. A mixture of dark stuff with some positive reality. If you’re in a real shit situation it can be near impossible to see a positive outcome unless you’re either an idiot or a serial optimist. I don’t want to contribute to the negative shit in my writing, there’s more than enough of that going around already. If I write songs about the bad stuff I think it’s only polite to remind the listener of the real reality. That it doesn’t matter where you’re at, it’s where you’re going that matters. Put the graft in and better times are inevitable. Easy.”

‘Where We’re Going’ is the latest track to preview ‘The Bonny’ following the release of the title track, ‘Dark Days’, ‘Sun Queen’ and ‘Canter’. The album looks set to cement his status as one of Britain’s top songwriters following his independently released Top 20 debut album ‘Erratic Cinematic’. The album has already sold over 130,000 copies and been certified Gold, despite Gerry limiting his exposure through the mainstream media in favour of communicating directly with fans. In total, Gerry has hit 160 million streams at Spotify, with a current total of 1.4 million monthly listeners.

In addition, today also sees Gerry unveil the artwork to ‘The Bonny’ with the artist drawn to two iconic shots of life in the ‘60s and ‘70s for his alternating album covers.

On the first, a mother and child in their tower block flat, Gerry explains: “It’s the contrast between the foreground and the background that gets me. It’s the look in her eyes. Hypnotic. Look at the image as a whole, it looks concrete and dangerous but she looks strong… resilient. There’s not many things stronger in this life than a mother’s love for her kid. ‘The Bonny’ is just a metaphor for dreaming something into existence and building it bigger for the people you love. If that image doesn’t capture what ‘The Bonny’ is about, I don’t know what does. It tells a million stories.”

‘The Bonny’ is available to pre-order on both digital and physical formats. The CD and cassette formats both feature an alternate album cover, while four collectible vinyl editions will be available: standard black vinyl; a flame-esque red and orange vinyl available exclusively from Gerry’s official website; orange vinyl; and red vinyl that will be sold via select independent stores.

Gerry’s website also offers various bundles which include items such as a signed lyric book and a new t-shirt design. 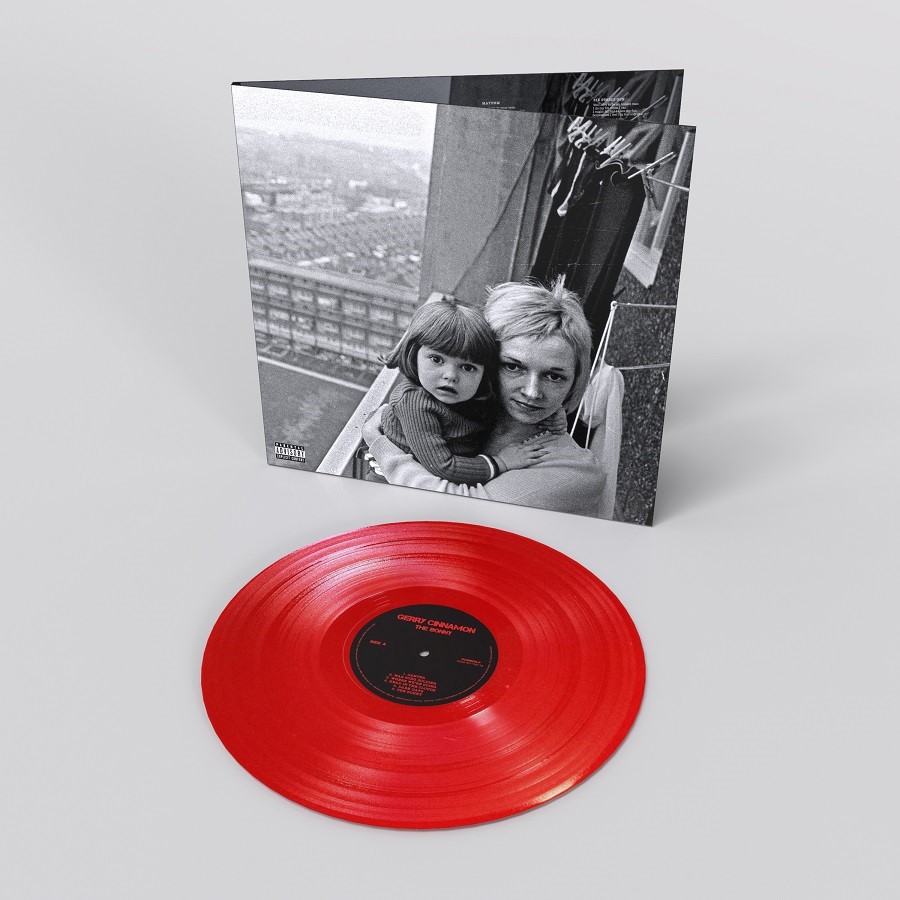 Gerry’s upcoming UK and Ireland tour dates are listed below:

About the Author: Eyes Magazine