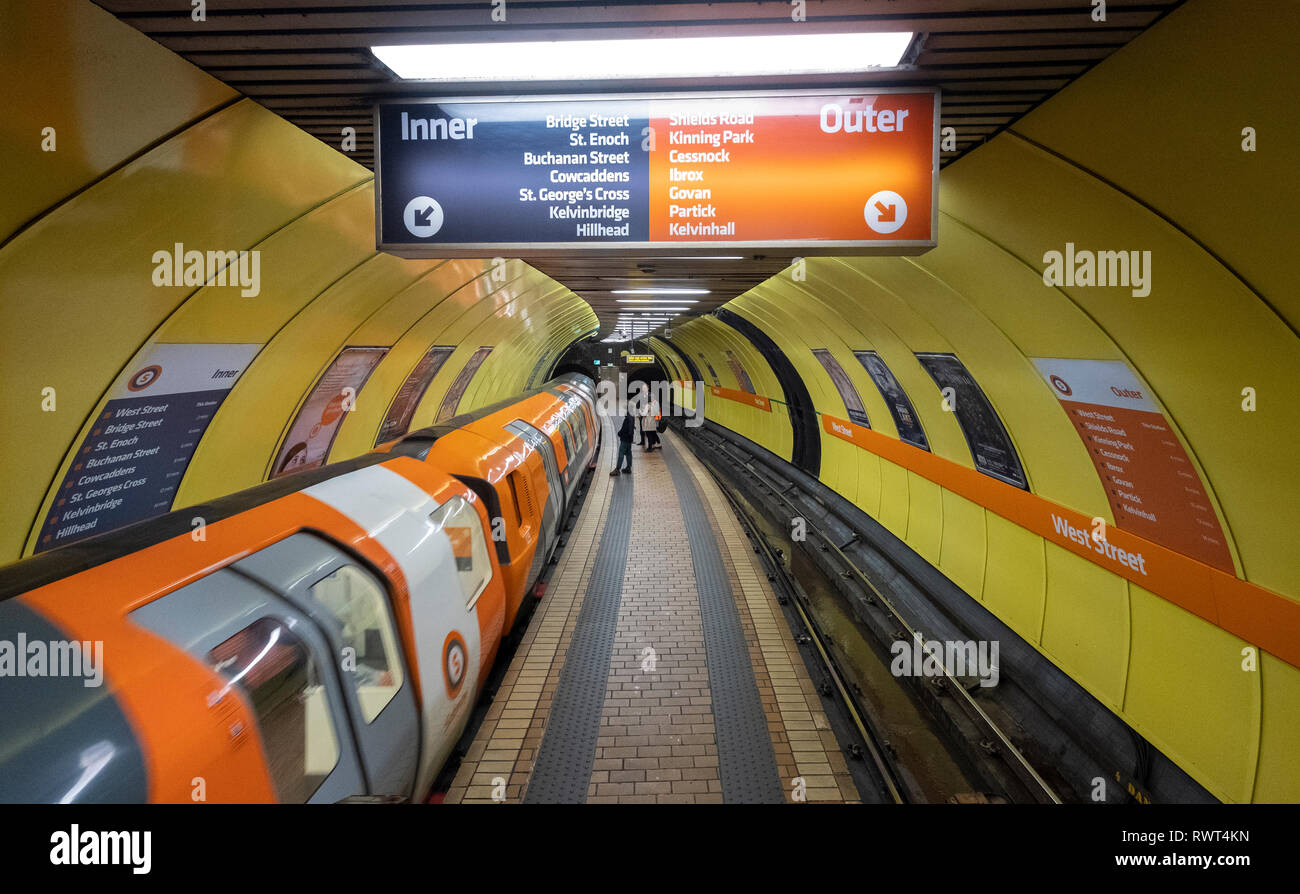 It’s the 3rd oldest subway system in the world

It is an underground rail system in Glasgow, Scotland. Originally called the Glasgow District Subway, it was opened on 14 December 1896. The system runs on a 4 ft (1,219 mm) gauge railway.

The subway is one of the oldest in the world. During the 19th century, it was a popular way to travel around Glasgow. As the city’s population increased, demand for public transport rose. Eventually, streets built for horse-drawn public buses and trolleybuses were crowded with pedestrians and delivery carts.

Demand for the subway declined after World War I. The closure of dockyards and wide-scale demolition of tenements contributed to this decline. In the late 1960s, the Greater Glasgow Passenger Transport Executive took over responsibility for the line from the Glasgow Corporation.

In 1974, the Subway was overhauled. An upgraded supervisory and control system brought benefits. This included the installation of new electronic destination signs.

The new look of the Subway was opened by Her Majesty the Queen on 1 November 1979. The subway is a key part of the city’s transport network.

Although the subway has been through some significant refurbishment and modernisation in recent years, the Glasgow Subway still has a unique character. Trains run on a circular route with 15 stations. Some stations have single island platforms while others have opposing side platforms.

It’s the most populated city in Scotland

The city of Glasgow is the largest and most populated in Scotland. It is located in the Scottish lowlands on the raised bank of the Clyde river.

As a result, it is an attractive destination for tourists. Glasgow has a wide range of shopping opportunities and is a popular tourist destination all year round.

During the Industrial Revolution, the city became a centre for heavy engineering. By the end of the 19th century, it was a major transatlantic commercial hub. Moreover, it was the first European city to reach one million inhabitants.

However, it was plagued with a number of problems. These included high unemployment, welfare dependency, and urban decay. In addition, the population had to suffer from the effects of the Great Depression.

But in the 1980s, the city enjoyed a significant turnaround. It invested in infrastructure and built an economic engine to support its resurgence.

It is now a force in advanced manufacturing and the creative industries. Business services and healthcare have also become important areas of strength.

In November 2021, the United Nations COP26 in Glasgow saw the city take a key role in the global drive to combat climate change. A study by the World Health Organization found that Glaswegians from socially deprived communities had a lower life expectancy than residents of similar deprived areas in other parts of the UK.

It’s the second most active station

Glasgow subway has been around for more than a century, and it’s still going strong. The ‘cable’ was replaced with electric traction in the 1930s. With a diameter of 3.4 m and a standard gauge of 4 ft 8.5 in, it is one of the smallest and most technologically advanced subway systems in the world.

The Glasgow Subway is one of the oldest in the United Kingdom. It has been operating since 1896 and remains unchanged today. There are no plans to expand it anytime soon. However, it is connected to many bus routes, trains and other forms of public transport.

First and foremost, it’s a good option for getting around the central part of the city. Most of the stops are in one place, making the subway a great way to explore the city without committing to a lengthy walk.

The Glasgow Subway also has a number of unique attractions. This includes the Riverside Museum, which was awarded the European Museum of the Year in 2013. And it’s not uncommon to see McGill’s on some of the subway stations. Also, the Glasgow Science Centre, with its IMAX screen and three buildings, is a must-see for any science buff.

The Glasgow Subway is also well-guarded. Although it is a small system, it is one of the most secure in the country.